Chapter IV deals with how good intentions may pave the road to hell. While reason was supposed to save the human race, it has quickly turned into its opposite. But how come so? Marco Polo explains a number of concepts through the cities he describes.

Olivia points out the problems that come with nominalism and faith into referential models of language. Aglaura is connected to this: It emphasis the essentialism that results from the former. Eutropia on the other hand points out how such misrecognition of one’s own and the World can cause the human to fail to see the morphology behind what we believe to be our “natural” roles: As interpellated subjects, we are rather the carriers of ideology. Our identity may seem unique to us, but behind all this abstract individualism lies a structure of actants and events, that does not really recognize individuals but cares only about functions that need to be performed.

Ultimately, as “hero”s of our lives, we actually fall victim to the morphology of tales such as progress and development. Zemrude points out how such tales are constructs, and subject to a certain degree of relativisim. Sophronia on the other hand, points out the importance of balance: Too much of reason, and it becomes all unreasonable. Calvino touched this theme in his earlier years, escpecially in his novels The Non-Exisiting Knight, and The Cloven Viscount. In the Non-Existing Knight, we read a story about how the exaggeration of virtue can lead to alienation among others. On the other hand, in the Cloven Viscount, the story maintains that both pure evil and pure virtue are absurd and alienating. Interestingly, pure virtue is given the status of the worst of all evils. 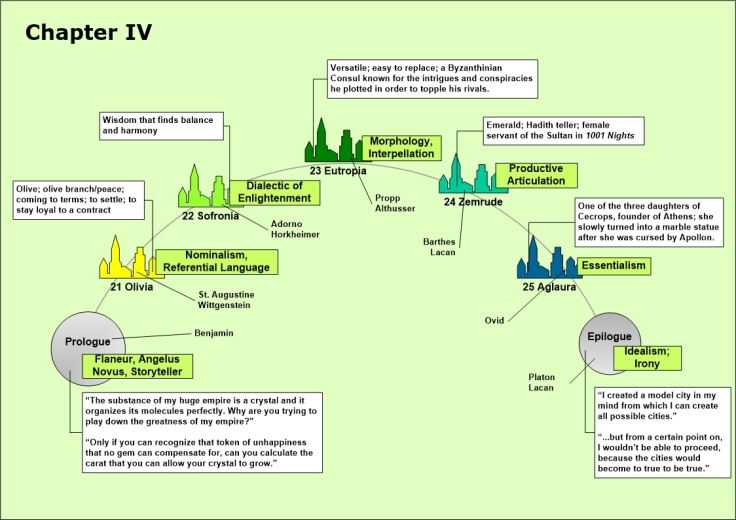 Can a “good” thing turn into its opposite and cause everything that it was supposed to bring an end to? Polo explains how nominalism, essentialism and a blind faith into one’s identity can lead into disaster.